Hispanics, were targeted during a mass shooting in El Paso, Texas at a Walmart on Aug. 8, 2019, around 10:38 A.M. making this date one of the state’s deadliest days.

Police have a suspect in custody, Patrick Crusius, responsible for 20 confirmed deaths and nearly 30 others wounded. According to The Associated Press, Crusius is a 21-year-old Caucasian man from Allen, Texas.

El Paso Police Chief Greg Allen said, “The FBI and other Federal authorities are looking into this case as a possible hate crime.”

The shooter emphasized a true admiration for the current President of the United States. His Twitter feed recounts daily moments of his radical and racist rants, where he begs for a world without immigrants and without liberals.

The stories from victims and witnesses of this day are tragic. Ryan Mielke, of the University Medical Center of El Paso, says of the 13 people brought to that hospital, those victims’ ages ranged from 35-82.

19-year-old Leta Jamrowski couldn’t sit so she paced the hospital hallways while waiting on medics to treat her 2-month-old nephew for broken bones. Jamrowski says her sister was attempting to shield her baby during the attack but was shot to death and fell on top of him. Her fall caused his bones to break. 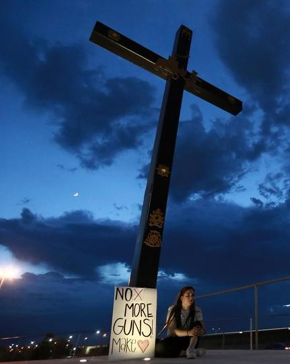 People gathered in Juarez, MX on Saturday evening for a vigil memorializing those who died this day. Signs read “No More Guns! Make Love”.